How to choose a web designer

Knowing how to choose a web designer that is going to create your shop window to the world is no mean feat.  Rush into it with a cheap deal and you could end up with a very expensive mistake.  But on the flip side, don’t be fooled by web designers who charge extortionate rates but don’t live up to their claims.

One thing that upsets us more than anything is when we get contacted by businesses to update their site, and during our time with them, find out that they have spent an absolute fortune on a substandard website.

There are so many ‘web designers’ out there that are prepared to rip off the unsuspecting and it is absolutely disgraceful.

We have had first-hand dealings with businesses that have experienced a site built with broken links, non-functioning online forms, incorrect emails, payment gateways set up incorrectly.  And the list goes on.

Another incident we have come across more times than we care to mention is where the website developer has created a site and listed it under their name.  The client then has no way of claiming this site back for themselves without undue time and stress.

Knowing how to choose a web designer

One client had a friends son offer to do the website for a small charge as he was just setting up.  He charged £300 for the most awful site we have ever seen and we advised the client to take it down immediately.  When we called him to get it sorted he wanted more payment, even though it was painfully obvious he had no idea what he was doing and was trying to learn as he went along

Always make sure you own the domain name

All too often we come across a site where the designer offered to obtain the domain name and look after hosting in addition to building the site.  One particular site was shockingly poor but when the business owner tried to take the site to another designer, it was found the original designer had registered the site in their own name and would not release it unless thousands of pounds exchanged hands.

Agree on time-scales in writing

One of our clients paid over £18,000 for an all-singing, all-dancing site that 18 months down the line was only half-finished and not fit for purpose.  Only after contacting the MD of the company and threatening to publicly name and shame did the site get sorted and in my humble opinion, was still not worth even half the amount that had been charged.

Use someone who understands your business

Another client used a website designer who refused to listen to what the client wanted and came up with something that did not fit the company brand or image whatsoever.  The client paid £3,500 for something that has now been ditched as it needs to be completely redone.

These are just a few examples of small businesses being taken advantage of.  So if you are getting your website created by someone external to your company, ensure you have a signed agreement in advance of what they will do, for how much, by when and how much they/you have after the work has been completed.

How to choose a web designer checklist 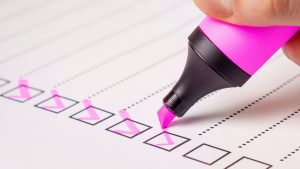 Never part with your money until you know what you are getting, by when and what happens after your web designer has finished.

And of course, there are some excellent web designers out there who do an excellent job and it is such a shame the less than efficient ones let down the side.

Just be careful.  And don’t be afraid to ask questions galore before letting anyone take over a very important aspect of your business for you.

Want to grow your business to the next level?

Behind the scenes gossip, fun and laughter

You have Successfully Subscribed!

Any cookies that may not be particularly necessary for the website to function and is used specifically to collect user personal data via analytics, ads, other embedded contents are termed as non-necessary cookies. It is mandatory to procure user consent prior to running these cookies on your website.